Sam, Brand Ambassador at Shakespeare Distillery, has a love for spirits that extends well beyond his work life. This, combined with his experience in distilleries and his training in the mixology world, lends itself perfectly to writing blogs about rum and its production. ​

What actually is Rum?

This is one of the questions we hear the most. As one of the very few producers of rum in the UK who make it from scratch, we’ve certainly done our homework when it comes to rum.

When you think about rum, you probably think about a mojito on the beach in Barbados or Captain Jack Sparrow stumbling along the shores, armed with an empty bottle of rum. Where does this association come from? Well, rum is made from sugar, either sugar cane itself or the by-product which is ‘Molasses’. The Caribbean has the perfect climate for sugar to grow, so naturally, it became one of the first places to start using it to create alcohol. Generally speaking, molasses-based rum creates a richer, spicy style of spirit; this is also known as Rum Industrial. Whereas rum made from sugar cane juice is known as Rhum or Rhum Agricole, giving you a sweeter, fruitier style. The big misconception with rum is that people think alcohol and flavour are both created during the distillation process -this is not the case! Gin gets its flavour from being distilled with botanicals, whereas rum’s unique flavour and alcohol comes from fermentation. Fermentation is an approximately 7-day bubbling process in which the combination of yeast, water and sugar creates flavour and alcohol. Once the ferment has finished, we are left with what is known as a wash, and this is kind of like a beer but stronger, fruiter and much sweeter. 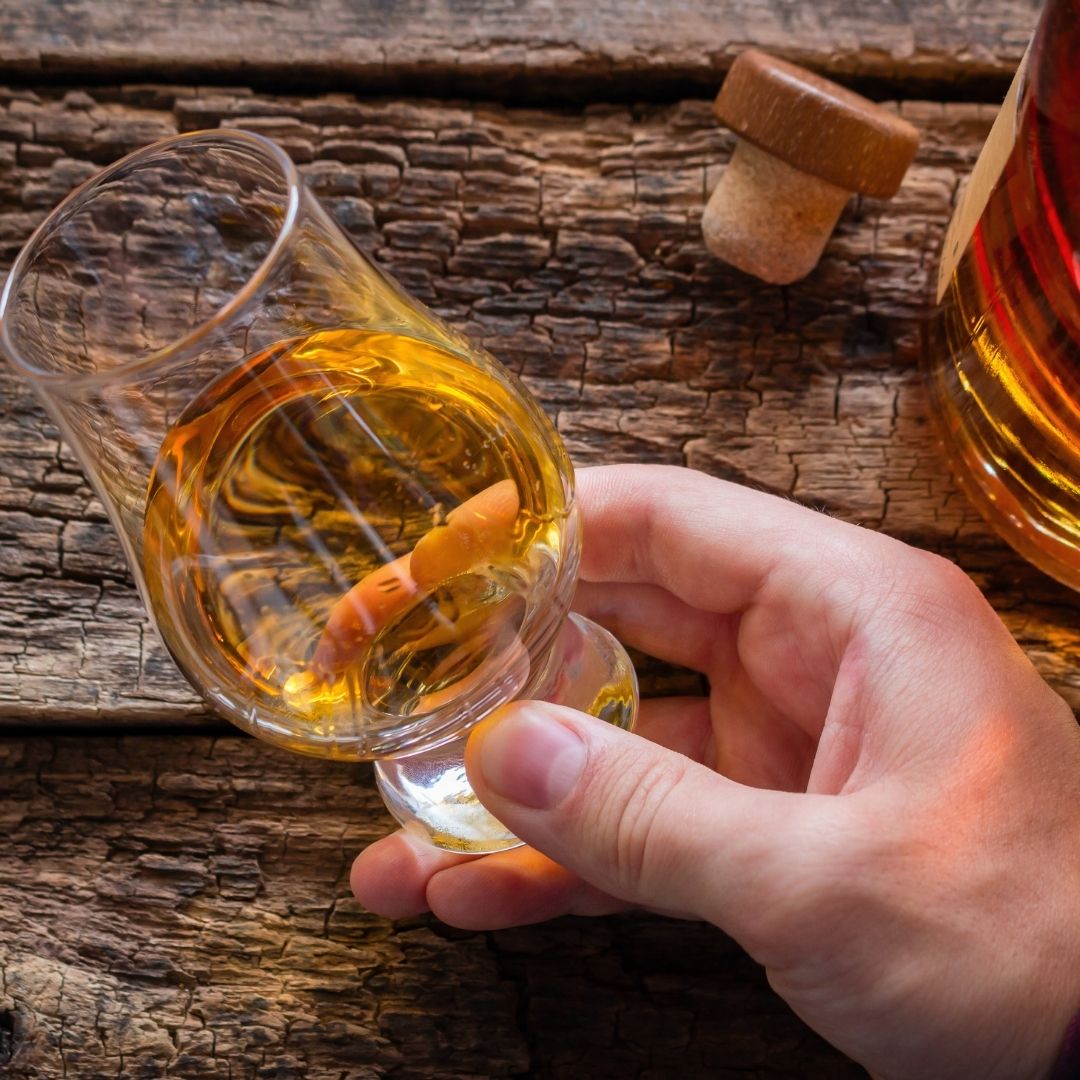 The wash will be distilled twice. The first time is called a stripping run (no, this doesn’t mean we all run around the distillery in our underpants!), and it creates a spirit around 50% known as low wines. This then does its final run through the still to be turned into a delicious white rum. All rum starts its life as a white rum. From there, it could be turned into a spiced rum, put into a barrel to age, or have caramel added to create a golden or dark rum. Because of this, I would say that rum is by far the most versatile spirit on the market; there are so many different types and styles, all with different serving suggestions. It makes ordering a gin and tonic seem really easy! To enjoy rum to its full potential, you need to understand the different rum and how they are best to drink. Don’t let this scare you! Start by trying your spirits neat, and this is something I preach across the whole industry. To know how to pair a spirit to a mixer and understand its flavour, base and quality, you have to try spirits neat. Even if you don’t know how to taste rum the right way officially, have a smell, taste, and start seeing the versatility rum has to offer. 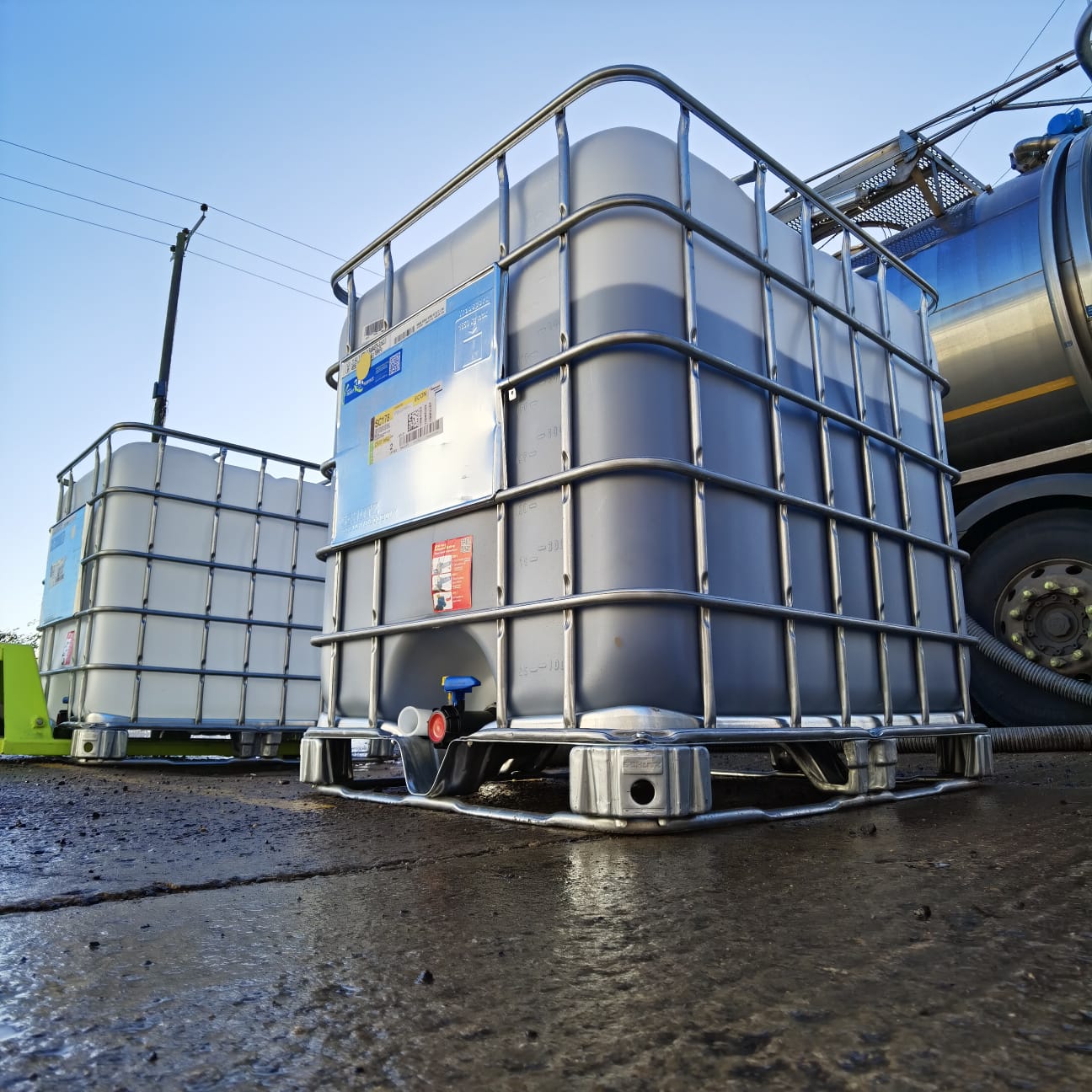 Fermentation of the Molasses

What actually is fermentation and how is it different to distillation? In short, fermentation is the step where alcohol and flavour is created, distillation is where this alcohol is separated (good flavours from bad) and concentrated into a delicious spirit.

The most important step when creating rum is fermentation, which is why we spent over 18 months researching and experimenting to achieve a bold and flavoursome product. In this blog, I am going to give you an insight into the fermentation process and the variables which influence our rum’s fantastic flavour.

Before we dive into the key components let’s start by looking at how alcohol and flavours are created. Fermentation is the chemical reaction of water, yeast, and sugar; but depending on how this is treated depends on how much alcohol is created and what flavours are produced. When the mix is heated up it allows the yeast to convert the sugars into alcohol. Whilst this is bubbling away a process called esterification occurs. Don’t switch off! Sounds boring I know but it’s quite simple; esterification is the formation of flavour molecules also known as esters.

The flavours that are produced are dependent on the following variables: 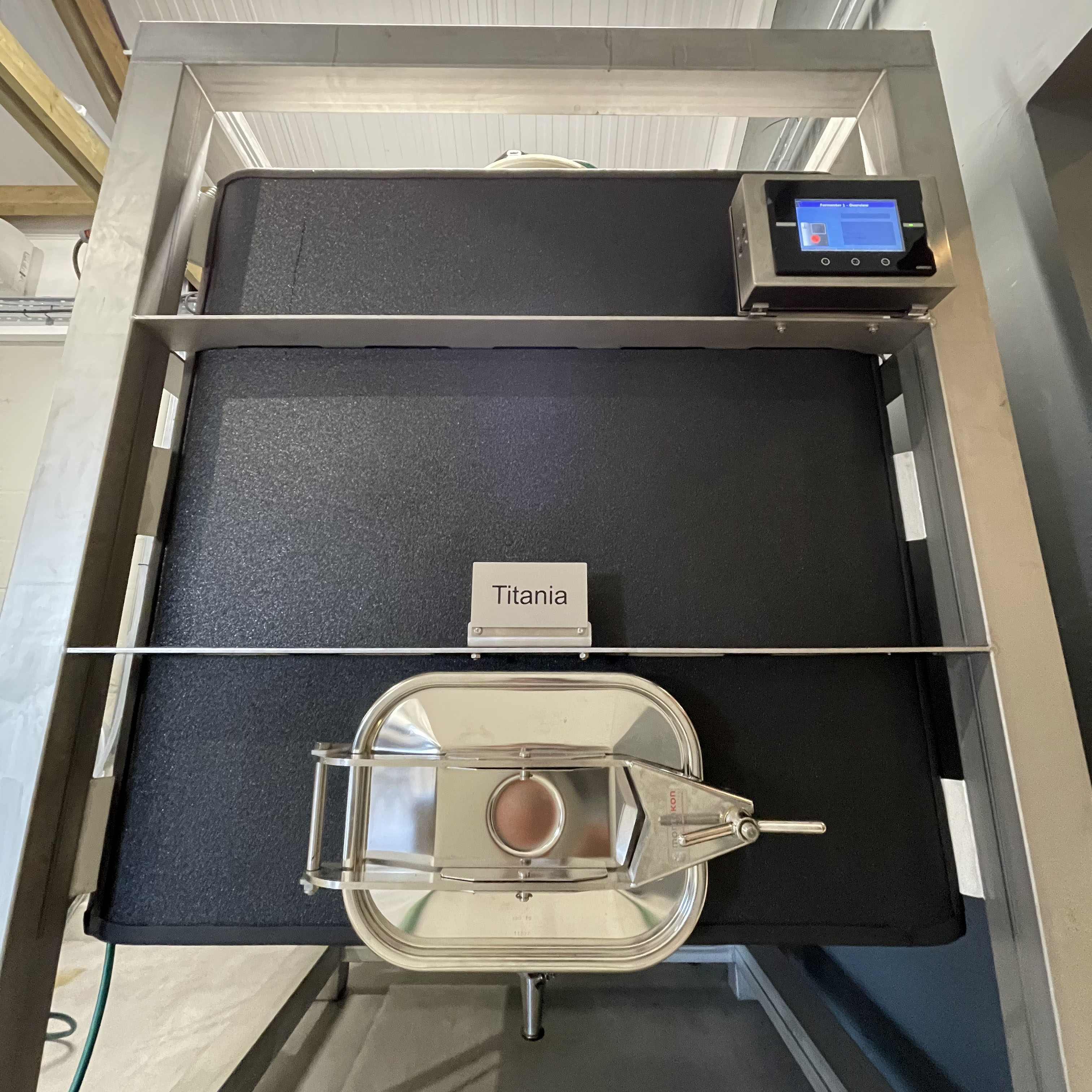 Yeast requires a source of sugar for it to consume and subsequently turn into alcohol. For whisky, the sugar source is typically from grains such as malted barley; for rum, you need to use a product that derives from sugar cane. There are several options for rum producers, either sugar, sugar cane juice or molasses. Many larger commercial distilleries will opt to use pure sugar as their base. We experimented with this and what it does is produce a lot of alcohol, as the yeast finds it very easy to convert into alcohol, so great, you might think? However, the minimal flavour is created, not so good! As a craft distillery, we can never compete on the scale; therefore, we need to compete on flavour, making stunning products that are different from mass-produced spirits. Sugar cane juice is generally only used in countries with their own supply of sugar cane as it needs to be fresh when used, hard to achieve if you live in a cold climate far away from a source of sugar cane. The other option that many craft distilleries opt to use is molasses; this is the leftover part of sugar cane, which is not easy to convert into sugar crystals; sugar refineries discard it. We use molasses as our base as it contains a greater depth of flavour; it is harder for the yeast to convert into alcohol, therefore your yield is lower, but you end up with a superior tasting product.

We’ll focus on PH, temperature and duration of fermentation further down in this blog! 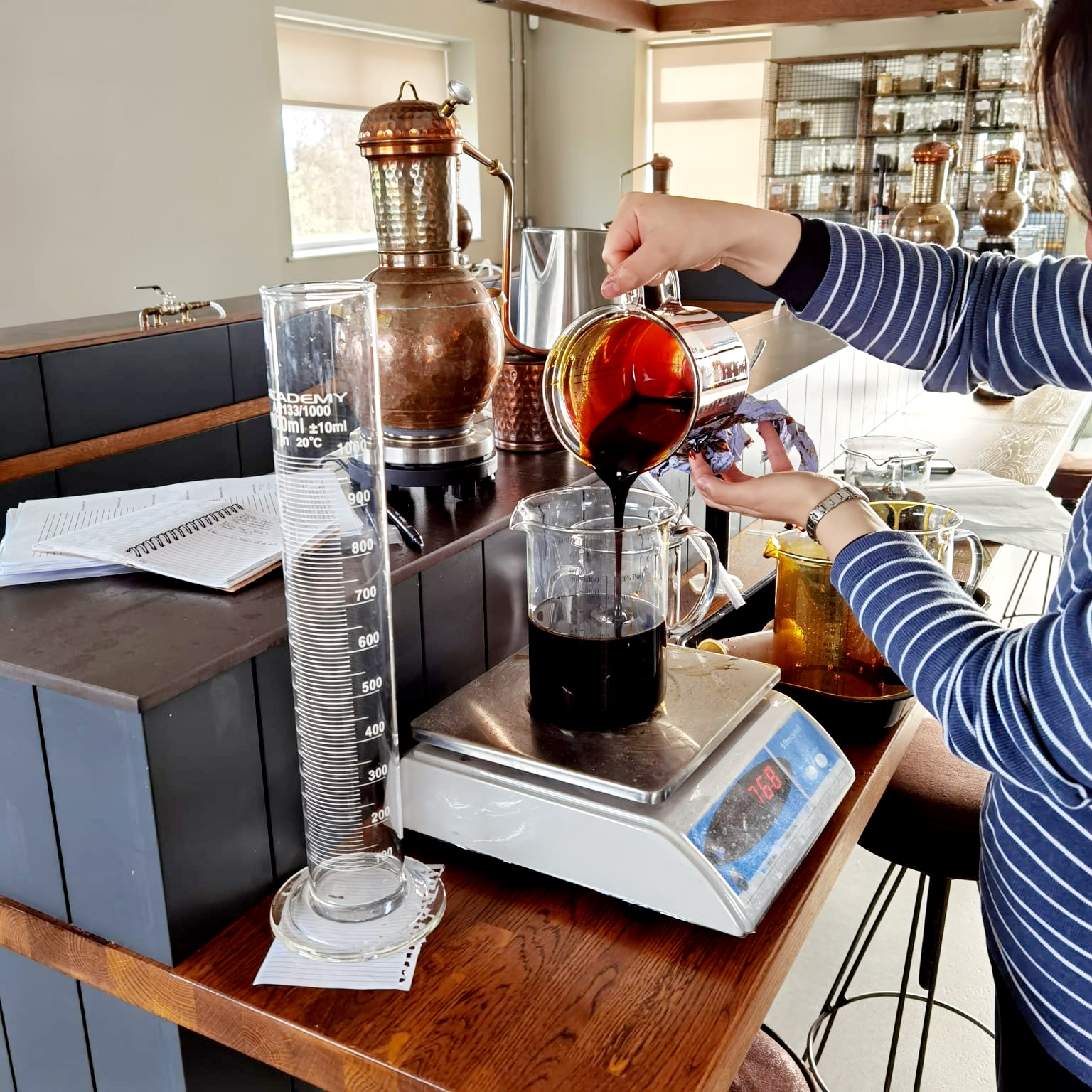 When we started our fermentation journey, we found that the PH level has a huge effect on the overall style of the finished product, which led us to play around with high and low PH fermentations. Generally speaking we found that the lower we went the sourer the flavour profile, whereas a higher PH creates a sweeter spirit. So PH is pretty easy to understand but not so easy to control.

We wanted to bring some of the sour notes into our rum, why you might ask as rum is meant to be sweet right? Well actually we feel the best rums are those that are more 3 dimensional, you want to taste the sweetness from the molasses but you want those rum flavours to linger in your mouth. Lowering the PH allows us to bring a deeper lingering flavour after the initial sweetness has hit your tastebuds.

There are several things you can do to influence the PH level. We found it’s quite common that calcium hydroxide or calcium carbonate are used to increase the PH resulting in a sweeter style of rum. Whereas you can use citric acid to reduce the PH, which stresses the yeast further to create those slightly sourer flavours. There are other acids used within the industry to reduce PH however citric is the safest and doesn’t have a negative effect on the flavours produced whereas other acids have been known to create stale flavours or a vomit-like aroma! Despite the demand for weird and wonderful flavoured spirits hopefully, no one would go this far.

Dead simple to get this; think back to high school chemistry lessons. Do you remember how as temperature increases, the rate of the chemical reaction speeds up? This is the basic principle that we must bear in mind when fermenting. To give you an idea, if we increase the temperature by 10 degrees, we will see the chemical reaction double in speed. This is great for rum production because with the chemical reaction increasing, so does the number of esters produced. When you try our Jester Rum, this is one of the first things you will notice, the front of mouth citrus followed by rich, fruity notes resulting from all those esters.

Tick Tock, how long should you leave your fermentation to ferment for? We’ve learned that the longer you leave it, the more flavour molecules are created, which is great when we are creating a bold and flavourful rum. However, if you wanted to create vodka, you don’t want lots of flavours, but you want lots of alcohol. During the first 3 days of fermentation, almost all the alcohol is made; after the 3rd day, you will make maybe 0.5 – 1.5% if you’re lucky, which is great; a nice quick fermentation with loads of alcohol - fantastic! But it won’t be until you distil the wash that you will realise that there is minimal flavour; in fact, 60% of flavour molecules are produced in the 4th 5th and 6th days. Unfortunately, many commercial rum distilleries also have short fermentations because they want maximum yield.

When fermentation is left for a long time, you will get a fantastic fruity middle mouth feel; this is a great but rare characteristic to find in a spirit. So guess how long we leave our fermentation for? 7 days, reducing what we can produce but making a product we are so proud of.

So to sum up, when fermenting our Jester Rum, we opted for a flavour-rich sugar source, opted for higher temperatures to generate more flavour molecules, opted for a long fermentation to allow the flavours to develop and controlled the PH to allow these flavours to sing and linger on the palette. The difference with Jester Rum, then? You guessed it - Flavour! That’s what craft is about.

You can purchase jester Rum and the entire Shakespeare Distillery range through Inn Express. For more information, please call our sales team on 01789 488 008